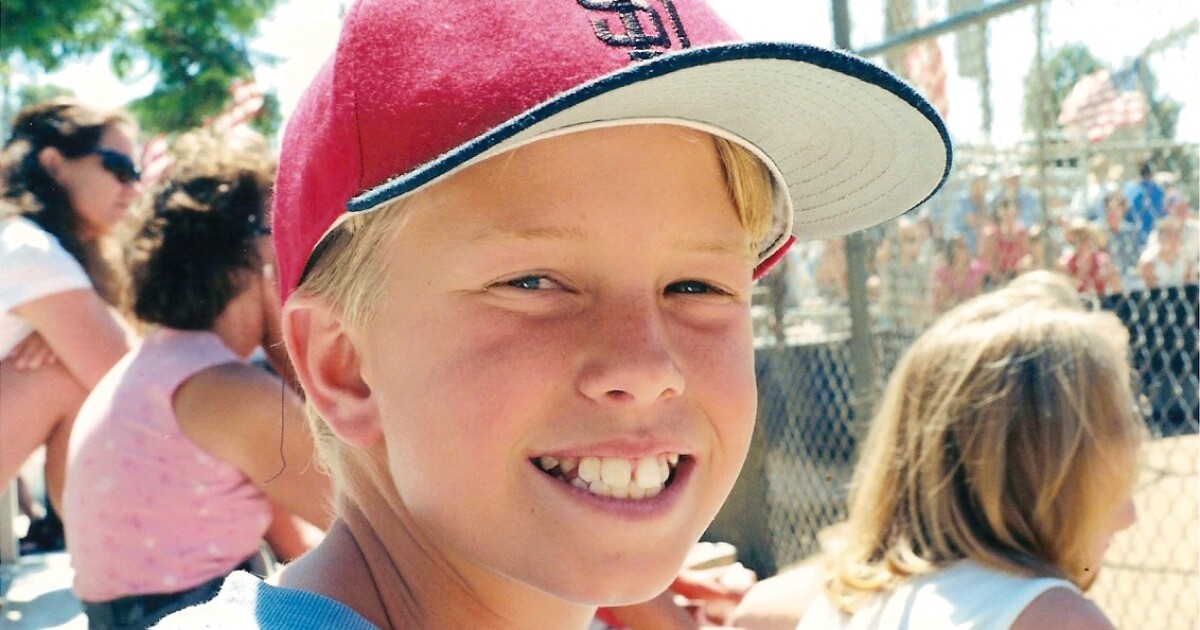 A Carlsbad mother and father whose baseball-loving teenage son battled a mysterious debilitating illness for five years and died at age 18, tell their story in a book, “ANEW Creation: Finding Meaning in the Midst of Tragedy”.

Beth Thorp, whose son Mitchell was known throughout the community and especially in the world of competitive baseball, shares her family’s journey of faith in hopes that it will help others.

It’s part of a promise she made to her son.

“I told my son that he would not die in vain, that we would take his inheritance and help other families who are hurting and fighting for their child,” Thorp said.

Mitchell’s illness began with severe headaches in seventh grade in 2004, when he attended Aviara Middle School in Carlsbad, where he was one of the top students. The doctors couldn’t find a cure for the pain. When Mitchell started eighth grade, the pain became so intense that it was difficult for him to concentrate in class and he had to continue his studies at home.

After spending several days at Rady Children’s Hospital getting MRIs, CT scans, extensive blood tests and other tests, there were still no answers. Tests came back negative/normal with no diagnosis made or cause found. The Thorps consulted with a top cranial expert across the country to no avail.

Mitchell began having myoclonic seizures and again underwent tests at the hospital. The neurologists, psychiatrists, hospital doctors, and others who were brought into the case had no answers. Mitchell lost 35 pounds and was unable to feed or walk.

Soon after, Mitchell was admitted to the UCLA Pain Center in 2005. There, Mitchell’s pain was so severe that the myoclonic seizures became constant and the tremors continued. Mitchell spent most of his time unconscious because the pain was so intense. After a month, they returned home and saw a doctor, who diagnosed heavy metal toxicity associated with a viral infection, which affects the central nervous system. After the treatments, there was a glimmer of hope when Mitchell’s pain subsided and his tremors and seizures nearly stopped. But eventually the condition returned.

Mitchell died in November 2008. The following year, Thorp and her husband, Brad, established the Mitchell Thorp Foundation, with support from the community, to raise funds to help families whose children are battling illnesses, life-threatening diseases and disorders.

Since then, the foundation has helped 1,500 families, including sibling support, giving away $2.3 million throughout the San Diego area. The foundation’s programs include medical and home assistance, healing and rehabilitation, and wheelchair conversion vans, as well as a youth leadership council for youth to support the foundation’s mission while by being trained in servant leadership skills. The foundation pays vendors directly to ensure the money goes where it is intended to help the child and family in crisis.

This is one of many miracles and encounters with God that Thorp talks about in his book.

When Mitchell was ill, in extreme pain and unable to attend school, and his parents searched across the country for a cure, his baseball league families and community rallied for him. In 2006, crowds attended a fundraising walkathon to help the Thorps with the huge medical bills they faced, despite having good insurance.

It was in Poinsettia Park, where Mitchell started playing baseball at the age of 5 and where his younger brother, Matthew, joined him later. Mitchell was able to attend the event in his honor for an hour, seated in his wheelchair.

This walkathon grew into the annual Warrior Spirit 5K Run/Walk in Mitchell’s memory and now attracts thousands of participants raising funds for families like the Thorps. Another miracle, said Beth Thorp.

“We now see God’s fingerprints so clearly all over this foundation and the children and families we serve,” Thorp said.

“It took me and my family 13 years to finally write our story. At first I couldn’t see all that God was doing,” Thorp said. “But as the foundation grew, I knew it had to have a higher purpose than I can see. God knows how to take a tragedy and turn it around for good,” Thorp said.

Thorp first got the idea for the book from his sister Cheryl. “She told me that Mitchell’s journey and ours have brought so many people closer to Christ that one day this story will be told.”

“The plan for the book was sitting in my desk drawer,” she said. “It took COVID-19 shutting down everything and canceling all of our events for me to focus on this project.”

Her husband praised her efforts.

“She worked tirelessly on the story during COVID, as we fought back the tears of having to relive the painful journey with our son Mitchell. She never took a break from writing as the words kept pouring out of her into the computer every day. She captured what the true essence of faith and family is and our love for one another that holds us together during a time of struggle,” said Brad Thorp, who was a pitcher for the Dodgers in the minor leagues. In the 1980’s.

It took Thorp 15 months to write the manuscript through tears and prayers, which turned into an inspiring 327-page book with 34 chapters, including family photos.

“The manuscript was accepted on its first submission to Morgan James Publishing in New York with worldwide distribution, another miracle from God,” she said.

“I don’t think I’ve ever met anyone more determined to turn their pain into purpose than Beth Thorp. By helping so many others, she and her husband not only found their own healing, but helped so many families to experiencing countless moments of genuine joy “smiling with tears rolling down your face”. Her optimism and faith are contagious. Her message makes you believe that you can get through your tragedies and that life is always a beautiful gift,” said said Jason Graves, senior pastor of Daybreak Church in Carlsbad.

Thorp’s hope is that the book will lead readers to find meaning and healing for the challenges they face. “They don’t have to walk their journey alone. They too can find a fresh start in ‘ANEW Creation’,” she said.

The book costs $24.99 (paperback) and $34.99 (hardcover), plus shipping to anewcreation.org, with proceeds going to the Mitchell Thorp Foundation. It will be released in bookstores in June.