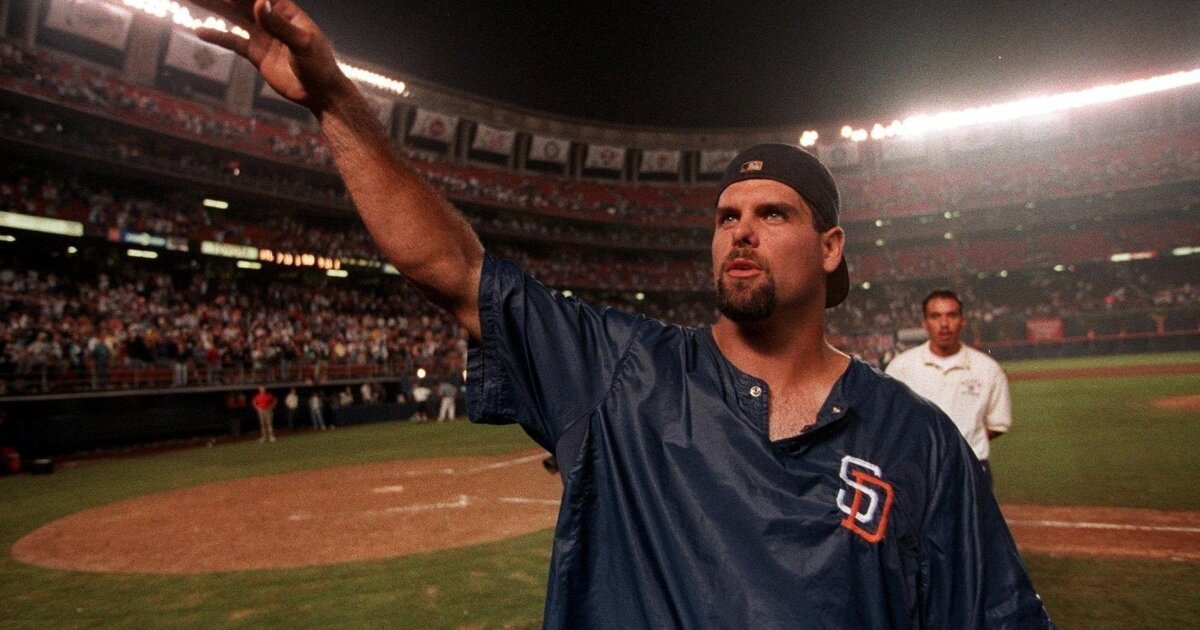 Excerpt from the new book on Ken Caminiti: ‘Snickers game’

This is an excerpt from Dan Good’s book “Playing Through the Pain: Ken Caminiti and the Steroids Confession That Changed Baseball Forever,” coming out May 31. It was printed with permission from Abrams Press. The clip recounts Ken’s infamous “Snickers game” on August 18, 1996, when he battled food poisoning to hit two home runs during the padres‘ series in Mexico against the Mets. (Read a Q&A with the author here.)

Ken started to feel bad. At first, he didn’t know what was wrong. His stomach was tumbling. His forearms, calves and hamstrings were cramped.

In the end, Ken had eaten the salad, not following the dietary instructions the team had given each player before the trip. And now he was paying the price. Food Poisoning – Montezuma’s Revenge. After a sleepless night, spent largely in the bathroom, Ken was back at the ballpark white as a sheet and very dehydrated. Manager Bruce Bochy was in his office when team assistant coach Todd Hutcheson and team doctor Jan Fronek placed Ken on an adjacent table, using a hanger for a makeshift IV.

After a bag of solution, Caminiti “started to focus a little better.” So they gave him another bag. All the while, Bochy saw no way to submit a composition card with Caminiti’s name on it.

As game time approached, Bochy prepared to walk with his lineup card to home plate. He still couldn’t see how his third baseman was going to be ready for playing time.

“I’m going to fall, Kenny, maybe we can use you later in the game,” Bochy told him.

“Look at me, I tell you, I feel good. I just needed an IV. Bochy paused.

“Indeed, he convinced me,” Bochy said.

The team planned to keep a close eye on Caminiti. He put on his uniform just before 4:05 a.m. match time. He entered the field and ran two sprints. The sun was beating down and Hutcheson was putting black “stickers” on outfielder Steve Finley’s cheeks. Caminiti shouted “Hutch” for a Snickers, the gooey chocolate bar with peanuts, caramel and nougat. But given the noise from the cheering fans, Hutcheson misheard Ken and brought Caminiti a set of black eye stickers.

“No stickers. I said Snickers,” Caminiti told Hutcheson. Ken quickly picked up his candy bar and gulped it down.

As the second began, Ken stood outside the left-handed batter’s box, the visor of his helmet pulled almost over his eyes. He inhaled and exhaled, his breathing labored.

He winced as he entered the box and put down his bat.

A short walk and a deep exhale and Caminiti was back for the second pitch, a ball out. One and one.

He leaned his bat against his leg and adjusted his batting gloves, barely stepping out of the batting box – why expel extra energy? The next pitch was another ball. Two and one.

Ken wiped his nose, spat and dug. It was going to be the field.

Wilson threw the plate and Caminiti pounced – a laser beam. The ball soared above the infield and continued to carry, settling in the left center stands. Caminiti, half an hour after being attached to an IV, had just hit a home run. He took a slow trot around the base paths. He didn’t show up Wilson – he just couldn’t run any faster due to his weak condition. He stopped running before he reached home plate and walked across, taking the thirty paces from home plate to dugout with his hand on his left hip.

There, Bochy and his Padres teammates smiled and laughed. IV fluid and a Snickers bar, and Ken went from being death personified to hitting a home run.

He came back at the end of third with two runners. Wilson threw a fastball to the outside corner for the first strike.

The second pitch was an out ball.

Sweat poured from Wilson’s nose. Caminiti had battled illness and dehydration, but now Wilson’s stomach was in knots.

When Ken finished third he stuck his tongue out at coach Tim Flannery, their usual routine, but this time he wasn’t playing – he was gassed.

The crowd celebrated Ken’s accomplishments with noisemakers and “the wave”.

He came back once again in the fifth. During the game, broadcaster Gary Thorne discussed the intravenous solution Ken had received before the game.

“Is it legal? asked his colleague Ralph Kiner.

Ken, grimacing and squinting into the batter’s box, worked the count to 3 and 2 before batting. He swung and missed, and the momentum carried him three steps outside the batter’s box – he had to pause to hold himself from falling. Another long, careful walk to the canoe, and Caminiti’s day was over, the legend forged forever.

He received another liter of intravenous fluid after playing and signing autographs for an hour.

“I don’t know what happened,” he said after the game. “Actually, I didn’t think I touched the ball.”

Ken’s teammates, impressed with his performance, began asking for the Caminiti, IV and Snickers treatment themselves.

Ken’s heartbreak continued after the team returned home: he hit a grand slam the following day against Montreal’s Pedro Martínez in a six RBI outing; then, two days later, on August 21, he hit two more homers to score a sweeping streak over the Expos. He had already surpassed his career high for homers in a season with over a month left to play.

The Padres, starting with Ken’s “Snickers game”, won ten of eleven games to build a two-game lead over the second-placed Dodgers. After Ken showed his teammates how far he would go to play — and playing through food poisoning was a step beyond shoulder or hamstring pull-ups or abdominal issues — it forced them to dig deeper too.

Ken would have fought to play in that Snickers game, no matter how big — he was achieving similar feats playing winter ball in Puerto Rico under Tom Gamboa — but the playoffs being so close gave him extra motivation. The Dodgers entered that fateful August day with a one-game lead over the Padres. But there was still more than a month in the season and seven games between the two teams. Ken was certainly motivated to leapfrog Los Angeles, given that he had gone 1,200 major league games without reaching the playoffs, and this was his best chance to do so.

There was always something deeper about Ken, a desire to keep playing no matter what pain he faced, affirming his belief that life is about competition. That drive inspired the smoothest performance of his career.

The World Bank has released the MIX Market database as open data, which is a huge gain for data consumers – Brige Payday