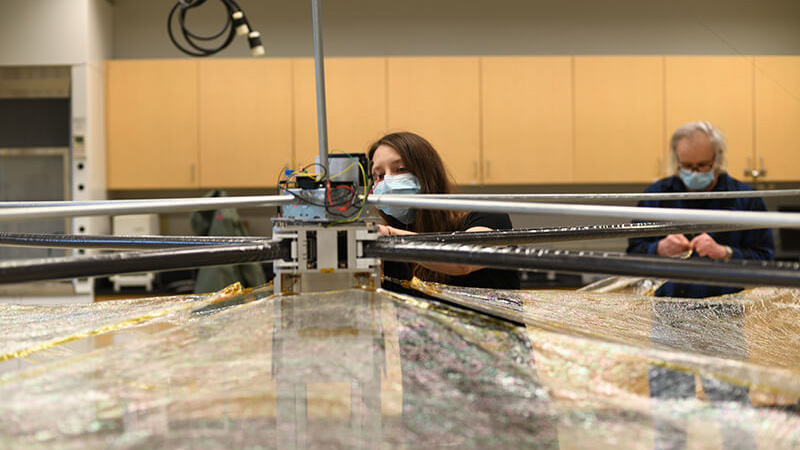 WEST LAFAYETTE, Ind. – A trailing sail that a team from Purdue University developed to bring launchers back into space back to Earth is expected to undergo a test launch on Thursday (September 2).

The mission, which is slated to take off from Vandenberg Space Force Base in California, will assess how well the prototype helps its vehicle out of space once the mission is complete. A live stream of the launch will be available via Everyday astronaut.

Faster de-orbit times can prevent spacecraft and launchers from turning into dangerous space debris while waiting to naturally de-orbit, a process that could take days, months, or years without assistance. Abandoned, lost or post-mission space vehicles are part of the more than nine thousand tons of space debris currently traversing Earth’s lower orbit at dangerous speeds.

Deorbiting technology is a preventative approach to managing the growth of space debris, a problem that NASA has recognized as being essential for the future safe space exploration.

Named Spinnaker3, the trailing sail will roll on a rocket of Firefly Aerospace as well as six other prototypes to test. The launch is part of Firefly’s DREAM Mission, carrying educational payloads into orbit.

The plan is for the drag sail to specifically desorbit the upper stage of the Firefly launcher. The developers expect the Spinnaker3 to reduce the vehicle’s upper stage desorbiting process by 25 to 15 days.

The trailing sail was produced by a team of students, faculty and staff at Purdue’s Space flight projects laboratory. The team devoted a year to design and development, and lab tests were completed in the spring. The development took place under the leadership of David spencer, Purdue Assistant Associate Professor of aeronautics and astronautics.

Spencer is also mission leader for the Mars Sample Return Campaign to NASA Jet propulsion laboratory in California and founder of Vestigo AÃ©rospatiale SARL, a start-up producing a full range of prototype Spinnaker trailing sails for various sizes of space vehicles. The Purdue Research Foundation license the technology, and Spencer worked with the Purdue Foundry on developing the startup’s business model.

The Spinnaker3, named for the three-meter length of its carbon fiber arrows, climbs outside the top stage of the launcher. The poles were provided by NASA Langley Research Center as part of a NASA Space Act agreement with Purdue. California Polytechnic State University, San Luis Obispo provided the avionics for the Spinnaker3 payload and assisted in the testing and installation of Spinnaker3 on the Firefly rocket.

The sail will deploy at the end of the rocket mission and use atmospheric drag to aid in the desorbiting process. When fully deployed, the sail measures 194 square feet and is made of CP1, a fluorinated polyimide developed by a high performance materials designer NeXolve. An animation of the deployment of the sail is available online.

Images of the trailing sail while in space will be captured by a camera mounted on the upper stage of the Firefly launcher. The vehicle’s desorbit schedule will be assessed based on tracking data provided by United States Space Command.

More details on the launch are available here.

Purdue University is a leading public research institution that develops practical solutions to today’s most difficult challenges. Ranked # 5 most innovative universities in the United States by US News & World Report, Purdue delivers world-changing research and extraordinary discoveries. Engaged in hands-on, online learning in the real world, Purdue provides transformative education for everyone. Committed to affordability and accessibility, Purdue has frozen tuition and most fees at 2012-2013 levels, allowing more students than ever to graduate debt-free. See how Purdue never stops in the persistent pursuit of the next giant leap to https://purdue.edu/.